Daily band lineups have been announced for the 12th annual Rock On The Range at MAPFRE Stadium in Columbus, OH on May 18, 19 & 20, featuring nearly 60 bands on 3 stages and led by Tool, Avenged Sevenfold, and Alice In Chains. Weekend VIP and General Admission tickets for America’s largest and most acclaimed rock festival are SOLD OUT, but a limited number of single day GA field andstadium tickets are now on sale at www.RockOnTheRange.com.

The daily band lineup (subject to change) for Rock On The Range is as follows:

Single day tickets for Rock On The Range are priced as follows (while supplies last):
GA Field: $129 (plus fees)
GA Stadium: $79 (plus fees)

Rock On The Range is produced by AEG Presents and Danny Wimmer Presents.

Rock On The Range is brought to you in part by Monster Energy. 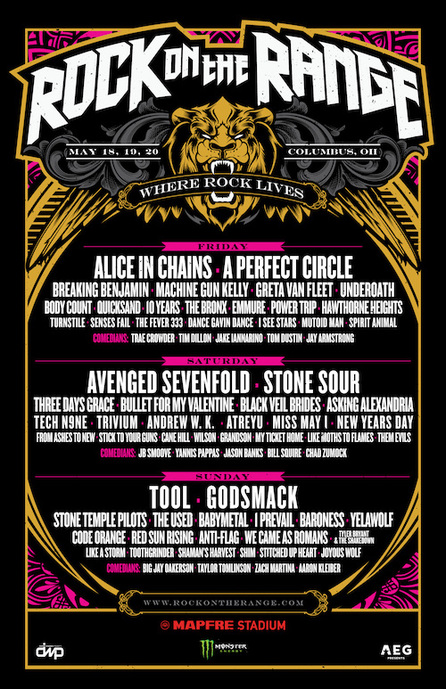