Copperline has released a music video for their song ‘Woman’s Touch’. The theme of this song is a look back on a break up of a relationship. This four piece from Sydney have band members who have had many years of experience in the music industry. The singer / songwriter Brad Christmas has nominated twice for an Australian Songwriters Association award. This high calibre of country music genius is obvious after listening to  ‘Woman’s Touch’. The music video we are premiering really supports the theme of the song and kept me captivated throughout the whole video. The cringing and me saying YUK! was all part of the enjoyable process. Comedian and friend Mark Simpson stars in the video and friends and family of the band all helped in making the music video just like a breakup.

Check out the music video here.

Copperline are the troubadours and travellers sharing the stories you never knew you needed to hear. Based in Sydney, this four-piece features Brad Christmas, Richie Gosling, Paul Handel and Gareth Richards, all of whom have spent years traversing Australia’s musical landscape before coming together for this new project. They’re no strangers to the scene, with members having supported bands like Radiohead, The Vines and The Tea Party before finding their feet – and voices – with a more country style of music.

Rusty Fords and Weatherboards, produced by the legendary Shane Nicholson, may be the group’s debut album but Copperline have more decades under their collective belts than they care to count (or admit). They’ve plied their trade in low-lit bars, far-flung pubs and corrugated sheds – even on the back of the odd flatbed truck. Singer songwriter, Brad Christmas, has also twice been nominated for an Australian Songwriters Association award. This long apprenticeship has seen them hone their unique brand of storytelling and songsmithery, and now they’re ready to share it with the world. 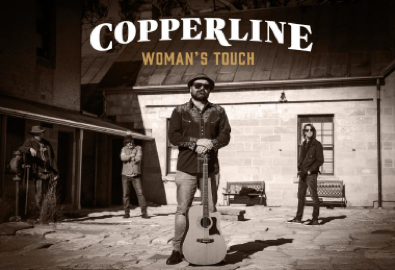 These songs – these stories – are the musical embodiment of Copperline’s meandering journey, and the characters they’ve met along the way provide the narrative heart of Rusty Fords and Weatherboards. The album’s

ten tracks follow an eccentric cast of struggling artists, single fathers, fading stars and even a professional magician, all of whom are coping with loss and longing but are hopeful, as we all are, for redemption.

With the utmost reverence for the craft of song writing, Copperline doff their caps to the likes of Neil Young, Tom Waits, Lucinda Williams and Steve Earle while charting a narrative and sonic course all their own. There’s a commitment to twang here – unapologetically so – and one foot rooted in the delta blues, but there’s also a desire to explore the wild frontier where genres and traditions intertwine.

The stories are sometimes humorous and often heartfelt, but they never stray far from being unflinchingly human. With the release of Rusty Fords and Weatherboards, Copperline are impatient to get back to what they do best: hitting the road, sharing these songs with old friends and, most importantly, uncovering new stories as they write their own.