LATEST ALBUM THE SIN AND THE SENTENCE OUT NOW

6 June 2018 — Trivium will continue their wildly successful The Sin and The Sentence World Tour with another leg of North American dates this fall. The band will hit the road on a headline run this October. The bill will feature very special guest Avatar and Light the Torch. The 25-date trek kicks off on October 3 in Tampa, Florida and runs through November 3 in Berkeley, California, with several stops in Canada. All Trivium tour dates are below, including their summer 2018 U.S. tour dates and festival appearances.

“North America! The last North American and European runs were the greatest Trivium tours we had ever experienced,” the band said. “Now how do we top it? We follow up with more songs from our extensive eight-record catalogue, a massive production and setlist, and two more of our favorite bands on earth: Avatar and Light the Torch. See you all soon.”

Trivium recently released the video for “Endless Night” from their latest and critically acclaimed eighth album THE SIN AND THE SENTENCE, out now via Roadrunner Records. Watch the performance-driven and visually-charged video, which was shot in Orlando by director John Deeb and produced by Deeb Studios, here.

The band also shared a video recapping the Fall 2017 leg of The Sin and The Sentence Tour with Arch Enemy. That particular leg boasted some of the best North American attendance tallies in Trivium’s touring history. Watch it here and you’ll feel as though you are front and center at a Trivium show. 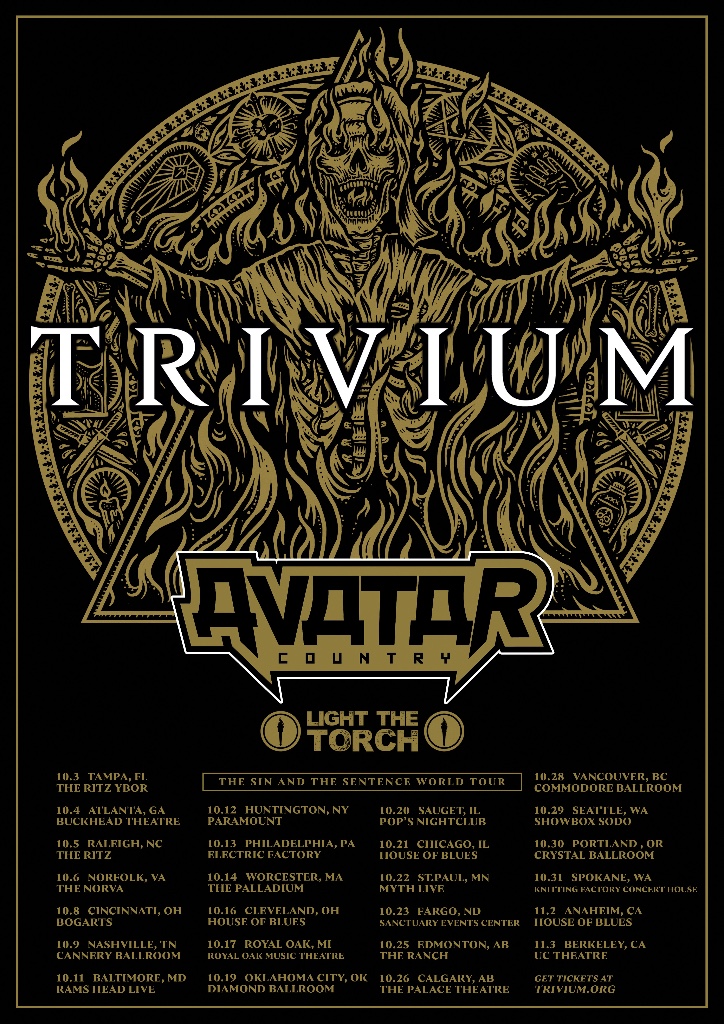 Just two years ago, Trivium made a stunning impact with SILENCE IN THE SNOW, arriving at #3 on Billboard’s “Hard Rock Albums” chart and #19 on the overall Billboard 200 marking Trivium’s third consecutive Top 20 debut. Hailed by Alternative Press as the “the purest metal of the year,” SILENCE IN THE SNOW featured the Top 10 Rock Radio hit “Until The World Goes Cold” and stands as a long gestating creative milestone for the acclaimed band.

Trivium catapulted into the first ranks of modern metal with 2004’s Roadrunner debut, ASCENDANCY, which was named “Album of the Year” by Kerrang!2006’s THE CRUSADE incorporated new melodic colors into the band’s sound, resulting in widespread critical applause and a top 25 Billboard 200 debut. SHOGUN followed two years later and received even greater acclaim and chart success, including a #1 debut on the UK’s Rock Albums Chart. In 2011, IN WAVES hit #1 on Billboard’s “Hard Rock Albums,” not to mention a stunning top 15 debut on the overall Billboard 200. Two years later, VENGEANCE FALLS arrived at #2 on Billboard‘s “Hard Rock Albums” chart. VENGEANCE FALLSwent on to make the Top 10 charts in Australia and Germany, representing some of band’s highest international chart debuts to date.