Early Morning general admission ticket holders line up to be first to place their chairs in the venue.

Beginning is September of 2018 with the reorganization of AEG Presents, speculation began on the Facebook fan groups.  Fear of change can fire quite a bit of controversy.  Soon after came the announcement regarding the liquor law changes, the elimination of the official camp ground stage, and camping regulation changes to disallow large enclosed trailers, which many campers rely on in this rural area.  To say that I was not concerned would be a lie.

As May approached, so did the typical weather for Oklahoma.  Water, lots of it, and tornadoes.  The water became so deep, that the River Spirit Casino, a popular off site place for attendees and some artists, was evacuated two days prior to the start of the festival.  It also closed highways coming into Pryor requiring the organizers to request that campers not arrive on the Tuesday prior to the festival to attempt to allow the camp sites to dry.  It was not starting off well.  Having been through the weather issues in the past, including mass evacuations in 2015 and 2017, and the evacuations of the two previous festivals this season, I was prepares for the worst.  I brought my Muck Boots. 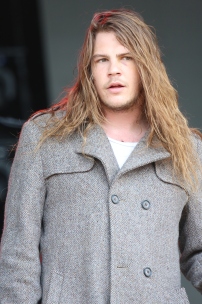 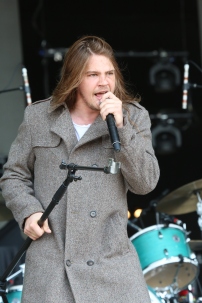 There were good and bad parts of this experience.  The first thing I noticed was the glorious concrete pad created for the press area.  It made such a difference to be able to have a dry place to work and greet artists.  It gave a professional appearance which seemed to put artists at ease.  The second thing I noticed was the redesigned layout for the venue stages.  It was one of the biggest complaints I heard in person, and read online.  Why?  It was so spread out and with the mud, no one took into consideration the mobility issues of people trying to move between stages.  It was an ADA nightmare.  Without jumbo screens to monitor other stages, fans, and press had to navigate through yards and yards of mud, fans and other obstacles to see favorite acts, or just choose to miss them completely.    What added to the distance was placement on vendors directly in the center of the walk to the stages.  The idea behind this appears to be an attempt to drive people to the booths as they walk through.  I would like to see if that was a positive factor as many chose to bypass this in order to get to the act they wished to watch on time.  It was as if they took ideas from another popular festival promoter, which works for them, but one size does not fit all and certainly does not fit Rocklahoma. This happened with press as well.  In the past, photographers were allowed, whether officially or not, to photo from the upper wall behind the pit on the main stage, and did not, unless they chose to, have to be in the pit with VIPs.  Maneuvering there is difficult at best and impossible at worst.  Cell phones up, hands, pushing and shoving made this a very hostile environment.  At one point I was elbowed in the nose.  The sound board is incredibly far and difficult to get to later in the evening so even with a 650 MM lens, the photos are not the quality expected from professionals which ultimately reflects on the festival with poor images.  A solution might be a specific platform at the main stage in the rear of the VIP pit photographers use for the three songs.   It would be easy to keep it clear and would solve that specific problem by elevating the cameras without blocking views of ticket holders. The pits at the other stages were perfect. Getting to them was a challenge as I had to walk through the crowd every time.  I could not write a proper review, as in order to get to the other locations, I had to leave immediately after the first three songs.  I skipped many sets in order to write on specific artists.  Walking through the crowd between stages with, in some cases over $10k in equipment, is also high risk. The arrangement of vendors, and all the chairs, compressed the crowd in the center making it a literal funnel and obstacle course. 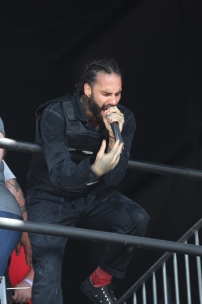 Known for his crazy antics, Jason Aalon Butler takes to the upper cat walk during their set. 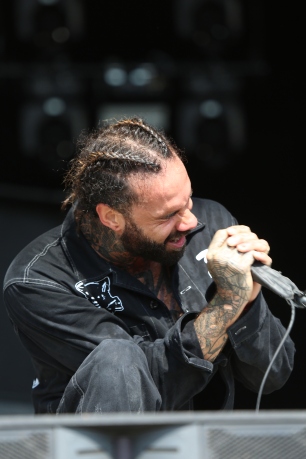 The security, now called safety officers, also received a good deal of complaints.  There were many members of the team I spoke to that were first time festival workers and they were very confused and fluid with the rules at one point dumping an entire group of photographers backstage instead of through the pit exit, running them head long into an artist.

Young GWAR fan, Bob, gets ready to rock out.

The first of many bloody events during GWAR 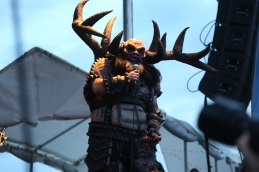 GWAR and a scary friend

The good points of Rocklahoma is always the party and the music.  Despite the impending weather woes, Rocklahoma was the first festival of the Spring season to get through their entire lineup without any weather delays.  The parties in the campground were going strong.  Again, however, the new curfew on vehicle traffic after 9PM, which when shows run closer to 11PM, curbs participation from ADA and other physically challenged people.  I was told there were shuttles, but at a cost of $5 per stop, per person, it was not economically possible to partake in those multiple times.  ADA should really have free rides, even if others have to pay.  Given the demographics of the VIP purchasers, this may continue to be a consideration.  The Saturday night evacuation was also a hassle with some campers leaving the campground and their tents for the solid walls of the local Walmart.  The campground was not prepared to handle the return and it forced some campers to sleep in their cars until 6 am. Certainly a learning curve for next year.  Do not be discouraged.  It was not all bumpy.  There was a lot of fun to balance this out. No one can control the weather so it is important to note that some of the bad was centered around these unpredictable elements. 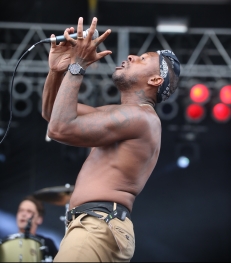 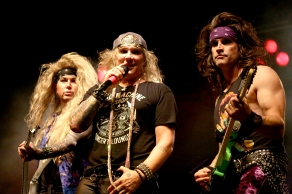 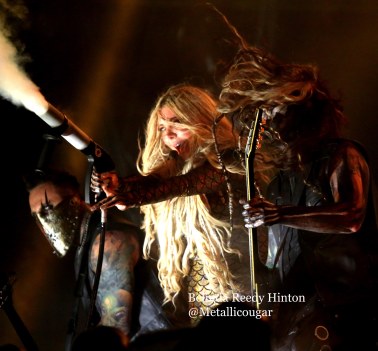 Travis Johnson, Marie Brink and Randy Weitzel of In this Moment team up to bewtich all who see them.

The size of the campground stages continues to grow and the after parties continue to be one of the best parties out there.  After the first round of tornado warnings in the middle of the night, I abandoned my campsite and tent to stay at a friend’s home, but many toughed it out, and bless them for their tenacity.  Perhaps I did not bring enough alcohol for that.  The official pre-party kicked off with the revamped D&B processing stage featuring regional artists and Slaughter.  Additional acts like Down For Five, Dead Metal Society, Ratchet Doll and the national acts:  Beasto Blanco, Lita Ford and Ace Frehley helped round out the weekend.  The stage’s return to under a tent also received mixed reviews, but was convenient in the hot sun and late night rain. The Midnight Devils closed the festival with a huge crowd, bringing the house down. 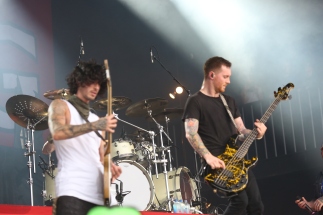 New sponsor Zyn, a Nicotine Pouch, supported the second stage, featuring acts like Rock/ Rapper Hyro the Hero, who quickly quieted the rumbling over having rap at Rocklahoma.  This guy is on fire.  He brings energy to the stage and at the early hour of 3:30 PM, just post opening that woke everyone up and got them engaged in the performance.  Gwar made their usual bloody appearance spewing stage blood on everyone in the pit and twenty rows deep into the crowd to the sheer delight of fans, and maybe frustration of photographers ( It tastes salty by the way.  I was covered.)  I did not mind as I was prepared.  There  was more than one safety team member who were a little shocked and very wet.  Sevendust and Steel Panther drew thousands from the main stage to see their show and those who make the walk were re energized by the performances.  Rocklahoma is always a marathon and not a sprint.

The Bud Light Stage had some very strong headliners and break out performances New Year’s Day, The Fever 333, Asking Alexandria, Glorious Sons, Buck Cherry, all had early performances but left everyone wanting more.  In This Moment had a beautiful show.  The new set built for the upcoming tour and the choreography was on point.  Maria Brink is still gorgeous and talented.  Shinedown had a visually stunning show with lots of pyro, amazing lighting and a tight set.  Many began to file out a bit early as in Oklahoma everyone knows to watch the weather.  Tornado warnings and torrential rain emptied the venue of the out of town drive in concert goers, but many stayed behind   While a lot of fans mourned Ozzy cancelling his long-awaited appearance Korn was a welcome addition to the line up and killed it as always. Avatar’s early Sunday performance was talked about the rest of the day.  They owned Rocklahoma.  While deserving of their promotion to the main stage performance, they  certainly would have been suited for the energy the crowd provides when the area in front of them is completely filed, which did not happen in the VIP area.  Those who did come down were immediately mesmerized by them and the ones who did not, missed out on a powerful performance. Bush and Disturbed also left the crowd pleased and ready to pre order next year’s tickets.  There’s already rumors Ozzy will make up his performance.  We shall see when the lineup is released.  Stay tuned.

Travis Johnson, Marie Brink and Randy Weitzel of In this Moment team up to bewtich all who see them.

View of the D and B Stage crowd during Lita Ford

Photographers standard view from the pit of Glorious sons.

Not everything was perfect, but Rocklahoma made it through with its loyal fans and as always was a good party,  The value of the tickets was reasonable and camping is always a plus.  They can not control the weather and with the new team, there is always a learning curve trying to merge old and new together.  The basic undertone for me was Rocklahoma has always felt like one big family coming together, and that was missing this year.   I am not giving up though.  I love Rocklahoma and will hang in there to see how the next one plays out.  Everyone has a bumpy year.  I highly recommend everyone making this journey at least once, but beware, you will be committing to coming back.