Hugo Pierre Leclercq aka Madeon has etched his own special niche in the world of EDM, never relying on the power of dance music but rather using it as a single note in the melody of his style.

My journey with Madeon really began with my love for Daft Punk. Their development of the electro funk genre can still be felt to this day. In my endless pursuit to find more like the duo , I came across this 15 year old French Boy and his Novation Launchpad. I remember watching his video for the track Pop Culture where he used his launchpad to perform a mashup track of various songs. It showed me that electronic music could be brought to life in a genre that mostly relied on pre produced tracked being played by artists waving their hands in the air. I followed him as he realised tracks like Finale and The City and eventually got to see him at Goodlife festival in 2012 and although he played before an onslaught of massive names in the EDM world his performance stood out.I often reflect on why I felt so determined to follow his Journey and if I had to boil it down , I would say his sound is so wholesome. His music has always kept a purity and magic. So much of EDM is Sex, Drugs and Parties,  and to have someone who can create music that seems to feel free of any of these tropes and just radiate innocent joy, is what I love. This could be due to the culture that his music came from. Being too young to get into clubs, his experience of seeing Daft Punk’s Pyramid performances deeply affected his love for visual performance and what could be done from a visual perspective in live music. Hugo has talked about how his inspiration came from the sounds of artists like Daft Punk and The Beatles and he has attempted to merge the emotions of pop with the energy of electro. He also came from the generation of internet interactions and his friendship with a young Porter Robinson of whom he shared success with over the years certainly can be heard through his work as well.

His debut album Adventure is truly a landmark in his career, with many of his favourite artists and inspirations featuring on the track listing. It pays homage to the sounds that brought the name of Madeon to life from his teenage years. Madeon also created a scavenger hunt through this album for fans wanting more. It sent the internet hunting for secret clues surrounding hidden messages within various tracks on the album. 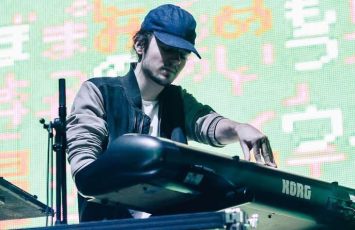 2016 was the year Hugo made me cry. Adventure had become one of my all time favourite albums alongside classics such as Gorillaz Demon Days and Daft Punk’s Discovery but a more modern album resonated with me in my top albums and that was Porter Robinson’s Worlds. The album played as an experimental electronica album with major influences coming from late 90’s early 00’s video games and anime and it truly captivated me with its feelings of nostalgia and comfort in loneliness only broken by the knowledge of other worlds where belonging exists.  Knowing of the relationship that Hugo and Porter Shared , I had dreamt of a collaboration, and in 2016, my dreams came true.

Their collaborative track Shelter, led to a short anime film and world tour for the duo , which to this day sits as my favourite live performance.

The show was a visual masterpiece, accompanied by mashups of both Worlds and Adventure with a few deep dive favourites that danced into the setlist.

Madeon has recently released two new tracks that show that although the last few years have been quiet for the Frenchmen, the adventure of his creative journey continues into the land of tomorrow.