Indie rocker Owen Gallagher has released another gem called ‘Vampire’. Owen has already impressed with me with his single about 7 months ago called ‘Messed [...]

Camarano is an Australian Indie artist that caught my attention with his latest single  ‘When I had Infinity’. I immediately had to hear it again. The musical [...]

Nathan Hawes has taken a new direction as an artist with his latest single ‘Up To You’. Now known as KESMAR he has left his acoustic guitar at home and now [...] 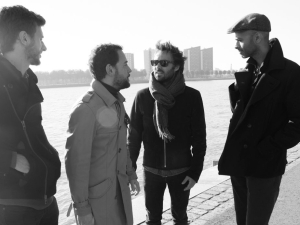 The B.A.R.N. have sent the world a strong New Year’s message of hope and choosing to do the right thing and ‘Love Thy Neighbour’. This song is catchy [...]

‘Turner’ is an insanely good creative tune from Mt. Cleverest. They are an Alt-Rock Indie-Rap band from Perth, Australia. They have a really great knack of [...]

Sometimes I come across music videos that make me almost go into a trance, eg quirky dancing like in the Fatboy Slim ‘Praise You’. ‘Slowmotional’s [...]

Hit prediction! Best acoustic song of 2018 I have heard! ‘Robin Hood’ is a perfect showcase for Anson Seabras incredible vocals. Anson is an artist that lives and [...]

‘Coming Home’ (feat. Kelly Paige) caught my attention due to the vocals. Anders Borgius and Kelly Paige’s voices not sound amazing individually but [...]

This is Indie music at it’s best! ‘Rdy or Not’ by Foxkeeper is one of those songs that just stand out in the hourdes of submissions I receive. The [...]

‘Summer Daze’ is the latest offering from Them Swoops this year. It is a bitter sweet trip down memory lane with the music video being the only moving images of [...]