Australia’s only chiptune festival announced its final line-up for its 6th instalment, set to take place at 24 Moons on Feb 23 & 24, 2018 – the last before the festival takes an indefinite hiatus.

Over the course of this year’s festival, audiences will see artists from 4 continents, taking inspiration from, or actually being composed with, antiquated videogame consoles. Of course, audiences just expecting ‘Mario at a rave’ will be surprised by the breadth of genres and sheer talent of the line-up on show this year with the festival taking a final opportunity to showcase the gamut of what can be classified as chiptune for Melbourne audiences.

With styles ranging from Canberran newcomer Aquellex’s frantic breakcore through to melody driven, discofunk from American Gameboy veteran Roboctopus, some of the highlights include:

Chipzel (IE): Arguably one of the best known names in chipmusic, Chipzel is the composer behind the BAFTA winning ‘Super Hexagon.’ Having played Square Sounds back in 2015, she has been one of the artists most requested by audiences to return for a repeat performance. Using Nintendo Game boys to create energetic, melodic, dance tracks, Chipzel’s boundless energy will both exhaust you and electrify you.

Disasteradio (NZ): Disasteradio is no stranger to Australian shores, or a number of others, having played 400 shows in 22 countries. Best known for his track ‘Rainbow Gravy’ (that became a meme on release back in 2010), this fast and fun synth pop project hybridises rich & layered plugin synthesizers, symphonic vocoders, driving percussion and a classic songwriting approach. Audiences will love his entertaining stage presence

Makeup & Vanity Set (US): MUVS has gained a lot of attention in 2017, and for good reason! His contribution to the Death Note soundtrack this year was arguably the best part of the Netflix movie. Heavily IDM influenced, most people would probably call his style ‘synthwave’ but thanks to his 8bit roots and 80’s vibes, Square Sounds feels that he’s an ideal fit for the festival and are excited to have him play his first Australian show at Square Sounds 2018

Bio / Tracks / Video
The weekend will also give audiences the opportunity to take the stage during an open mic and pick up tips and skills at daytime workshops both for those new to chipmusic, and more experienced chipmusicians looking to pick up some new techniques. 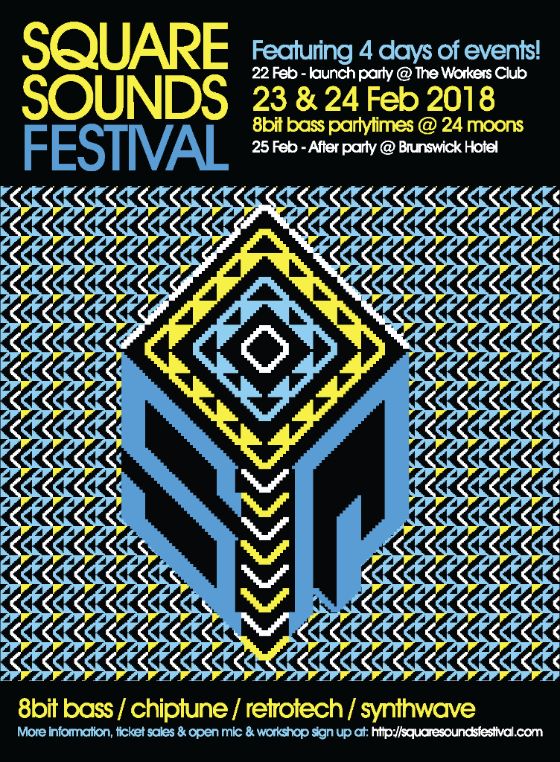