15 May 2018 — Powerful metal outfit Flynn Effect are today announcing the Friday July 6 release of their new EP Monument! The Brisbane-based band are celebrating this release with a first taste of the EP, a new single and video entitled “Believer” – AND announcing single release tour dates in June! Pre-orders for the EP go live on Tuesday May 22, along with new single Believer going live for streaming at Apple Music and Spotify.

Powerhouse Vocalist, Tomina Vincent, said of the new single, “Believer is the perfect representation of the change of direction we had been heading towards for the last year or so, and it was never a question, this was always going to be the first single, no matter what came after. It’s one of the most optimistic and uplifting songs we’ve ever written. Its a song about love in all its forms, whether its friendship or a passion for something, and the belief that love is our strongest weapon. Believer is heavily inspired by Pendulum – It’s got lots of nerdy synths and grooves and we just love how it turned out. Our biggest ambition with this track is to put a smile on people’s faces, and I certainly hope we can achieve that, it would be our greatest reward.”

Surfacing as a live band in August 2014 and releasing their first album Skin just a few months later, Flynn Effect quickly established themselves within their scene as a force to be reckoned with – delivering a refreshing take on alternative rock and a theatrical live show featuring the band’s own self-created automatic lighting system, CO2 and pyrotechnics.

Flynn Effect’s ambitious live performances have seen the band share the stage with rock and metal royalty, including Lacuna Coil, Wednesday 13, Davey Suicide and Seether, as well as share the stage with Australian heavyweights Orpheus Omega, Osaka Punch and Darkcell. In 2018, Flynn Effect are embarking on a new journey with the release of a new EP and a national tour in its support.

The new clip highlights the live performance of the band – Tomina muses that “…We knew straight away that Believer was a track we needed to film live. We’ve always put a lot of work into our live show and we use lots of cool stuff like pyrotechnics Co2 effects and our own automated lighting system, but we never quite put that on film before so it made sense to introduce new music that way. Believer was filmed the very first time we ever performed it live and it was very important to us to capture our fans’ reaction and make sure we included them in the video. We also filmed at the now closed New Globe theatre which was very sentimental for us as we’ve launched both of our albums there and it was an honour to be one of the closing shows at that iconic venue, and also have something to commemorate it by. We worked with the Incredible Adrian Goleby and his crew, and I think he really brought it all to life in a beautiful way. We hope you enjoy it!”

Flynn Effect’s forthcoming EP will be out on Friday July 6, with Pre-Orders for the EP going live Tuesday May 22. Single Believer will be available in Spotify and Apple Music for streaming from Friday May 18 and tickets for Flynn Effect’s tour dates will be on sale Wednesday May 16, with details at flynneffectmusic.com. 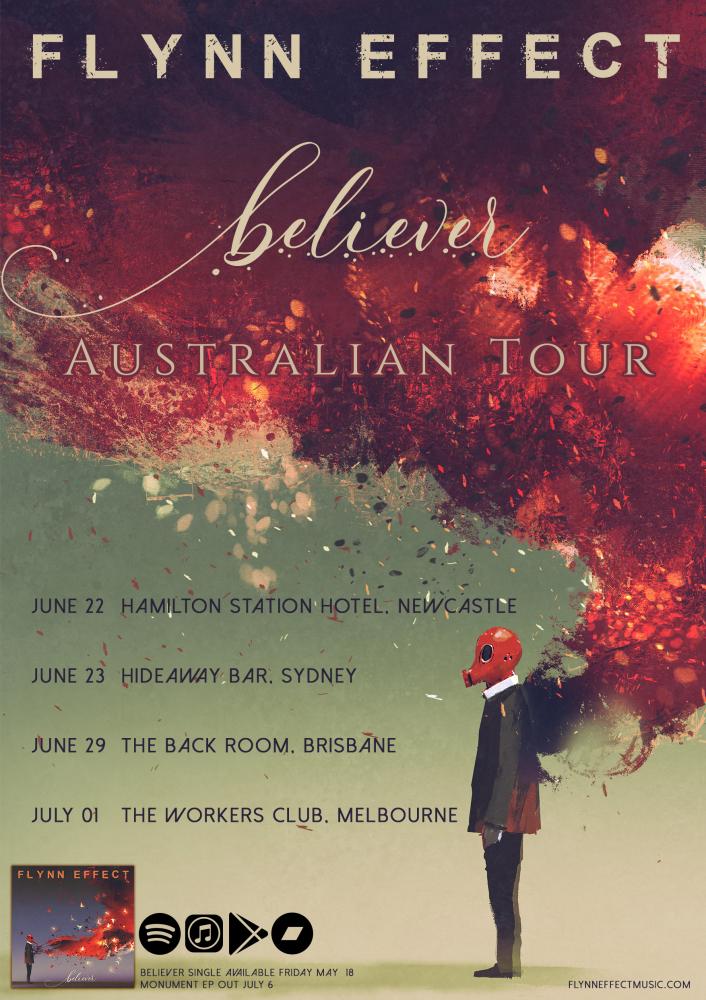 Brisbane – June 29
The Back Room
w Archetypes, Therapist and Mercurious

Melbourne – July 1
The Workers Club
w Death Of Art, Hedron and To An End

Tickets on Sale 16th May – Tickets and info at flynneffectmusic.com